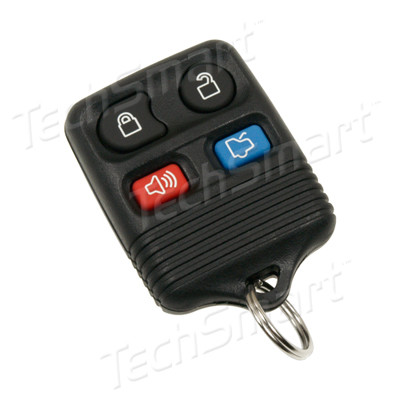 Transmitter works in harmony with your vehicle. Most modern vehicles come with the option for keyless entry.

The problem is that these transmitters drop, break, get lost, rubber buttons wear, contacts inside become corroded and the plastic case can crack.

TechSmart™ offers one of the most common keyless entry transmitters (VIO >42 million) providing a high-quality, cost effective solution to replace the damaged or lost original. Remember to always follow OE reprogramming instructions to ensure that your TechSmart™ keyless entry.

A fob, or more commonly called a key fob, is a small security hardware device with built-in authentication used to control and secure access to network services  and data. The key fob displays a randomly generated access code, which changes periodically, usually every 30 to 60 seconds. A user first authenticates themselves on the key fob with a personal identification number (PIN), followed by the current code displayed on the device.

Key fob is also a word used to describe a key chain and several other similar items and devices. The word fob is believed to have originated from watch fobs, which existed as early as 1888. The fob refers to an ornament attached to a pocket-watch chain. Key chains, car starters, garage door openers, and keyless entry devices on hotel room doors are also called fobs.